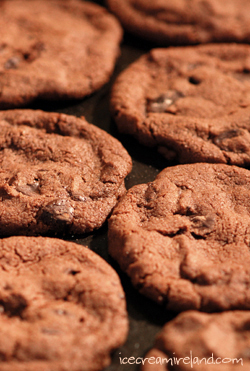 Feeling the need for a little chocolate burst last night, I went making some cookies. I have written about Pierre Herme here and here. The recipe came from him via Dorie Greenspan’s excellent cookbook Paris Sweets, which is a compendium of desserts from Paris’ best pastry shops. 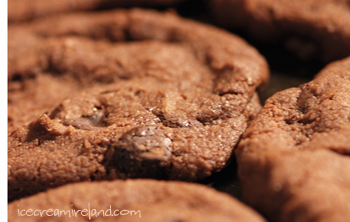 What makes these cookies really special is the inclusion in the ingredients of fleur de sel, hand-harvested sea salt that is less salty and more flavourful than regular salt.Â Although the recipe only calls for half a teaspoon, it’s a distinctive flavour in the final cookie and really works well. (I actually have “fior di sale,” which comes from Italy rather than France, but is the same idea.)

These are dead easy and will disappear very quickly indeed, so I highly recommend them. Rather than write up the recipe, I will refer you to Dessert First, where Anita has already done so. She rates them as her favourite cookies. I’d better eat the last few before I make up my mind!

P.S. – The photos don’t really show how dark and full of chocolate they are. I took the photos late at night, and it’s impossible for me to be patient and fiddle with lighting and camera settings when there are fresh cookies cooling! 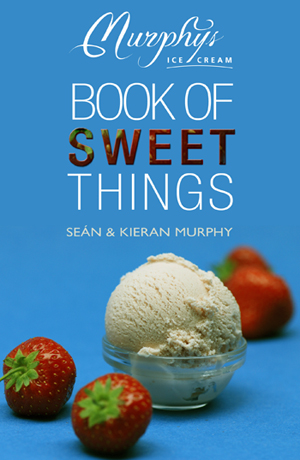 Here’s the latest mock-up from the publishers for the cover of our up-coming ice cream book. I’d be grateful for feedback! Please comment. Do you like it?

Virtually every recipe I have written for hot chocolate, chocolate ice cream, or chocolate sauce involves making a chocolate emulsion. An emulsion is simply a mixture of two liquids that don’t normally mix, such as oil and water. Chocolate can be a bit tricky to work with, and consistently getting a smooth, glossy final product is not always so easy. In fact, I struggled with it before going off to France for the Valrhona chocolate course. There, I learned a very simple trick that’s shown in this video – adding warm liquid to warm chocolate in small parts, mixing all the time, until you have a very professional looking product.

Anyway, here’s the video! I hope it’s helpful. Here are recipes where it might come in handy: 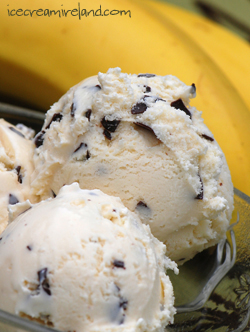 Here in Kerry, there are some fruits that are hard to get in the depth of Winter, but you can always find bananas. They might not always be ripe, and most of the time I will pass them by when in the supermarket, discouraged at the green peel. For, as bananas ripen, the starches turn to sugar, and once they do so, this sweet, complex, rich, and velvety fruit can boost energy and give any occasion a lift, especially when it’s in ice cream. 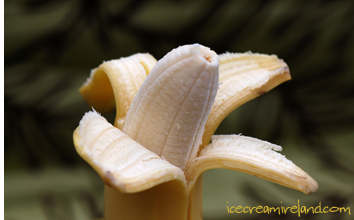 Customers in our shops often taste our banana ice cream and say, accusingly, “This tastes like real banana!” Yes, indeed. If the only banana ice cream you have ever eaten was bright yellow and tasted only of flavouring, you will be surprised by the decadence of this recipe. Needless to say, there’s no food colouring (and why would there be? Not only do we never touch the stuff, but yellow banana ice cream doesn’t even make sense. Banana peels are yellow, not the fruit!)

All fruits in ice cream should be ripe, and with bananas there is hardly such a thing as too ripe. If you have bananas left over with brown spots on the skin, perhaps ones that the kids wont touch or that even strike you as too soft, then they are perfect for ice cream. We have used bananas when the skin had turned completely brown, and the result was delicious. Bananas, oddly enough, ripen best off the vine, and if all you can find are greenish bananas, please wait to make this ice cream and let them ripen.

I have added some chocolate shavings because I love the bitter bite of dark chocolate with banana.

Amazing what comes to my attention. Here’s the latest ice cream accessory: if you suffer frosty fingers from eating ice cream out of the tub, you can order this Cuddle your ice cream cozy (by Gracie Designs) for $8. That is, I suppose, cheaper than gloves.

And to go back, for a moment, to Delizia! and eating food on the fly – here’s a bit of information from Mr. Dickie in case you’re travelling toÂ Italia andÂ wondering about Italian ice cream etiquette:

In Italy, ice cream is the only thing that can be enjoyed legitimately while walking, but even then the cone should be wrapped in a napkin, with another napkin ready to dab the mouth, and the maximum permitted speed is a gentle amble.

It’s a bit unclear whether eating a full tub in an ice cream cozy while ambling gently is in breach. I suppose it is, so take along a thick skin and a few extra napkins.

I am reading two delightful food books: Delizia! – The Epic History of the Italians and their Food by John Dickie and Secret Ingredients – The New Yorker Book of Food and Drink, edited by David Remnick. Both are very interesting, and both show up not only how much serious foodies used to pack away but the incredible variety of the dishes served.

In Delizia!, Mr. Dickie shares a menu of a Duke’s feast for 104 guests in Ferrara back in 1529 with five courses. Here’s what they ate for starters:

104 small pies with a filling of capers, truffles and raisin puree

Again, that’s just for starters. The following four courses are just as astonishing, both for volume and for variety.

In Secret Ingredients, some of the early articles have similar excess, although appetites seemed to have dwindled compared the 14th Centrury. A. J. Liebling, a man who was known to say “I used to be shy about ordering a steak after I had eaten a steak sandwich, but I got used to it,” writes about a certain Parisian gentleman who, in the early 1950s, ate for lunch –

…raw Bayonne ham and fresh figs, a hot sausage in crust, spindles of filleted pike in a rich rose sauce Nantua, a leg of lamb larded with anchovies, artichokes on a pedestal of foie gras, and four or five kinds of cheese, with a good bottle of Bordeaux and one of champagne, after which he would call for the Armagnac and remind Madame to have ready for dinner the larks and ortolans she had promised him, with a few langoustes and a turbot – and, of course, a fine civet made from the marcassin, or young wild boar, that the lover of the leading lady in his current production had sent up from his estate in the Sologne.

“And while I think of it,” I once heard him say, “we haven’t had any woodcock for days, or truffles baked in the ashes, and the cellar is becoming a disgrace — no more ’34s and hardly any ’37s. Last week, I had to offer my publisher a bottle that was far too good for him, simply because there was nothing between the insulting and the superlative.”

I wonder who, these days, would be able for the meals described above, although another article in the Book of Sweet Things describes a 34 course mid-day feeding frenzy in France in 2004. Still, in these busy times, three hour lunches seem an obscene waste of time, and the only banquets we’re likely to come across are second-rate wedding dinners. Somehow, the waistlines swell regardless, or so we are told. Maybe it’s those snatched lunches and snacks without the time to properly digest them.

Reading about the joy with which people faced their food in bye-gone days only emphasises how much we have lost and how much food we consume on the fly. I, for one, will try to slow things down in 2008 and spend more time with my food (and ice cream). Maybe I can even up my consumption. Mind you, I doubt I am about to go gilding sea bream after carving radishes, baking cream pies and skinning smoked mullet. Still, one can make an attempt. Now, where did I leave that bottle of Armagnac? 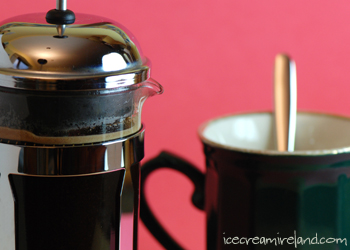 Both of our shops are closed for the month, and that’s always difficult for me in terms of coffee. I need my daily fix, and I miss having good coffee on call! What I usually do is revert to my home cafetierre (photo above) using our organic Fairtrade bean or top up with a hit from my stove-top espresso maker.

I have written before about Yauco Selecto beans from Puerto Rico, and yesterday I brought some home. For anyone who hasn’t tried Yauco, it is defintely worth the splurge (the beans are very expensive). We have offered Yauco in the shops for a while now, and those who tried it, loved it. This bean is not good for espresso, but makes a great cup of coffee.

The result this morning, using a medium-fine grind for my cafetierre, was delicate and smooth, with a little hint of fruit and enough body to invigorate a damp, cold January morning. For those who like milky coffee, it also makes a wonderful, refined cafe au lait – simply heat some milk up to a simmer and add it in using a ratio of about 1/3 milk to 2/3 coffee… 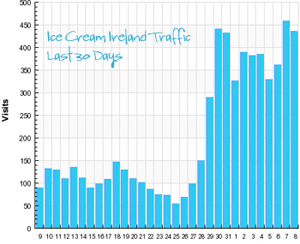 Since I changed my site template on the 28th of December, the traffic to Ice Cream Ireland has more than tripled. Most of the hits are coming through search engines, so maybe this template is just more search engine friendly? I’m just an ice cream man! I don’t understand these things and would appreciate an explanation if anyone has one (though of course I’m not complaining)…