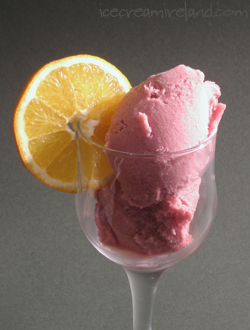 For anyone interested, I’ll be at the Food and Wine Christmas Fair at the RDS in Dublin, giving an ice cream master class tomorrow (Saturday) at 4:45pm.

I’ll go over the following recipes:

I’ll also try to answer any ice cream questions. Hope to see you there! The other day, I was taking photos of sundaes in the shop, and I’m quite proud of the one above. Then, Róisín arrived with her mother, and things got messy quickly.

I think the following series tells the story: It must be said that Róisín didn’t have any interest in eating it, but never underestimate how much fun it is to stick your fingers in cream!

But could they have done it with ice cream? Via Trust Tommy. 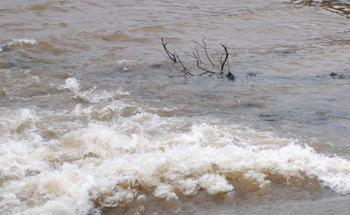 The rain continues to pour down, and the flooded streets and angry waters seem to reflect the mood of the country after last night’s soccer defeat to France. I enjoy watching soccer, but I am not a mad soccer fan. And yet, I could help being swept away in the excitement last night as Ireland’s Robbie Keane scored to make the dream of going to the World Cup seem suddenly very real. Perhaps it was the symbolism of it as well – if the Irish team could win against all odds, against one of the giants of world football, then couldn’t Ireland, stuck in gloomy economic times, also perform a miracle and haul itself out of its difficulties?

Then, of course, this happened:

Suddenly it all seemed so unfair – a goal that should have been disallowed and our dreams evaporated. All the tremendous heart and hard work of our players resulted in nothing. Perhaps, again, it’s the symbolism of it that has Ireland in such a depressed state today. We are, after all, well-used to losing in international sport. However, to put in one of the best performances in recent memory and still lose (unfairly) strikes at the heart of the current Irish predicament. We are a small nation with huge competitive disadvantages due to our size and remoteness, and if hard work and heart is not enough, what is?

It must be said that sport (or life for that matter) doesn’t usually hinge on one moment, even if that moment in retrospect becomes everything. There were a host of missed chances not only in this game, but in previous games as well. We could have beaten Italy and topped the group. We could have played better again France in Croke Park. We could have scored more or defended better in any number of matches, but we didn’t.

Life will go on. There will be more matches, and we will have chances to bring Ireland out of its economic mess. I would hope, once the raw, immediate emotion of anger and disappointment passes, that instead of becoming stuck in negativity and conspiracy theories, we will instead realise that both as a team and a country we can and should do even better – that we have it in us. 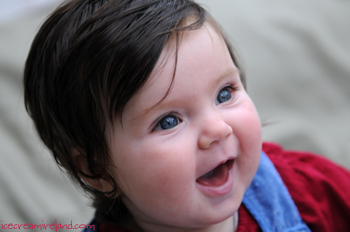 We should be proud of our team, because our players showed us last night their potential is far greater than many would have admitted. I believe, for all the obstacles being placed in our path (both internally and externally), that the same is true for Ireland. We must keep the drive, as well as the joy and hope and build a better future for both us and our children. It wont hinge on one game or one moment. It will be a long, hard campaign, but we can do it. 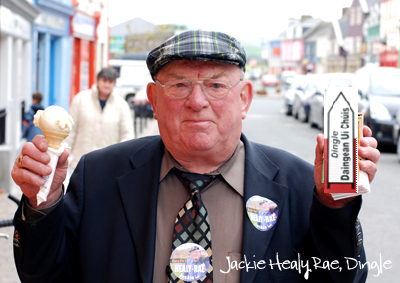 It’s been a long, long road road, but the end might be in sight. Yes, five years after Minister Ó Cuiv announced that Dingle didn’t exist, and almost four years after a plebiscite where the town overwhelmingly voted for Dingle/Daingean uí Chúis, it looks like there is some forward motion on the name, seemingly mostly due to Jackie Healey Rae, who insisted on it as part of joining the government. Mind you, supporters of the Dingle/Daingean uí Chúis name have been hopeful on this before and wont really believe it until it is in law.

Still, the Kerryman has a story that Minister Gormley met with Joe O’Toole and will attach a provision on the name to a bill regarding the Dublin Mayoral election. It should be published by Christmas and signed into law in the Spring.

It would be great to see the back of this issue and get on with things, and it would be a big relief if the will of the people was recognised. 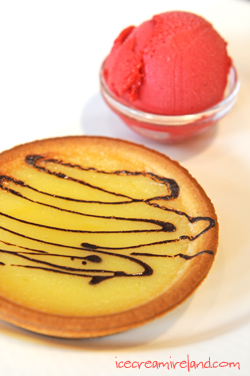 I promised a customer, who loved this tart, that I would post the recipe. It’s closely based on a recipe from Simply Sensational Desserts by Francois Payard, with the only difference a slight modification in the sugar. I have found that Payard’s book has given me the greatest baking success of any cookbook, so I highly recommend it.

With any tart or pie baking, the hardest part is usually the dough, and so if you want to make this the quick and easy way, buy a pie shell or some tart shells from your local supermarket. Some of them are quite tasty, and you’ll save yourself a lot of time and trouble. If you do want to make the dough yourself, you can find Payard’s recipe here but make sure you have flour without raising agents!

Anyway, once you have the pie shells, whether you make or buy them, you’ll find this is one of the easiest recipes in the world!!! 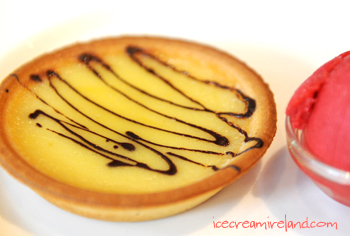 1. Preheat the oven to 150 C.
2. Bring water in double boiler to simmer.
3. Zest andjuice the lemons.
4. Put lemon and eggs in top of double boiler (before putting over heat) and whisk until smooth. Add the sugar and butter.
5. Cook in double boiler until the butter has melted and the mixture is smooth.
6. Allow to cool for 15 minutes.
7. Pour into pastry shells.
8. Bake for 8 minutes, or until the centre has become solid.
9. Decorate with a slice of lemon, or with some drizzled chocolate, as I have done. 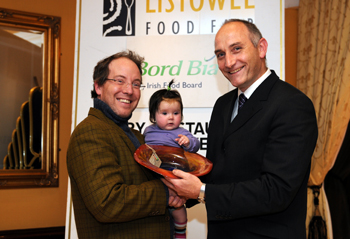 Murphys Ice Cream was given a “Kerry Food Hero” award at the Listowel Food Fair last night. It’s the first award of it’s kind in Kerry, and it’s humbling, since we have so many food heroes of our own, both within the country and around Ireland.

There were a lot of awards, and sadly I can’t remember everybody. However, here’s a short list: 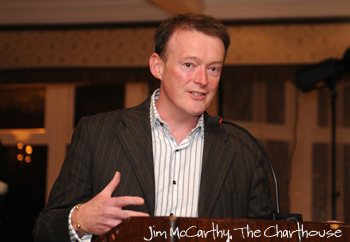 The Charthouse won best Kerry restaurant (and we were delighted to see a Dingle restaurant scoop that prize!)

The women of the Traveller cookbook – Bonar – Wild and Delicious were honoured.

There was a big crowd at the event, most of whom came to see a cookery demonstration by Kevin Dundon. Well done to all the organisers!

One of the highlights of my evening was a long chat with Joe Daly from Valentia island (he makes ice cream there as well as bottling his own milk and buttermilk). A true gentleman!

I am ashamed to admit that I’ve never been to the Listowel Food Fair, since something has always seemed to come up with the business during it, but I am going this year (it’s on from the 5th  – 8th of November), no matter what. I have heard so much great feedback over the years, and I’ve just been looking through the website. The lineup is most impressive. From the farmhouse cheese awards to Organics with Attitude to a children’s food art workshop, I’d say there would be something for everyone.

There’s even a seminar for artisan producers!

Check it out if you can.