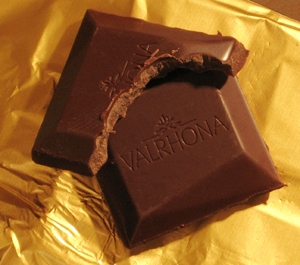 I’ve written on Valrhona multiple times and mentioned them in the Irish Times article today, promising a list of Irish suppliers. The distributor is Odaios Foods, but following are a list of shops where anyone can go in and buy a bar. Do so. They are fantastic!

For those interested, here’s the full programme for the Dingle Film Festival…

Screening of On Location Documentary With Godfrey

10am – 4pm – 25 Workshop Programme 3, The 3 Principals of plot, a master Class with Eoghan Harris

The Killing of John Lennon directed by ANDREW PIDDINGTON

Workshop programme 4, Production, a Master Class with Ned Dowd(Last of the Mohicans, Apocolypto

The Christmas Miracle of Jonathan Toomey 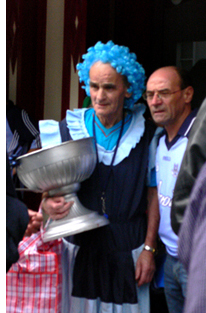 I went up to Dublin with some friends this past weekend for the clash of Kerry against Dublin, and am back in Kerry again quite tired! 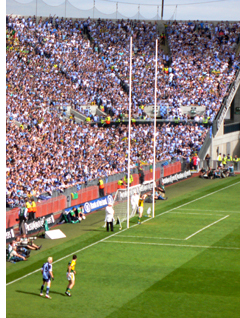 It was a great fun, not just because Kerry won. There was brilliant atmosphere, and I had my first encounter withÂ the pheomenon of Hill 16 full of Dubs (photo right) albeit from a safe distance. Dublin fans are quite impressive and sure know how to make noise!

Other highlights of the trip were a delicious smoothie from Fallon & Byrne, which went some way toward healing a hangover. Tasty sandwiches from the same got us through the match. I didn’t have such good luck finding a decent cappuccino, though, even though we tried several new places (when will baristas finally stop burning the espresso and scalding the milk?)

On Saturday night, we ate at the Mermaid Cafe, then moved on to Mulligans (the great culchie meeting place), then the Palace Bar, and from there spotted former Kerry great, Bomber Liston, among other familiar faces.

The All-Ireland beckons, and my head hurts already… 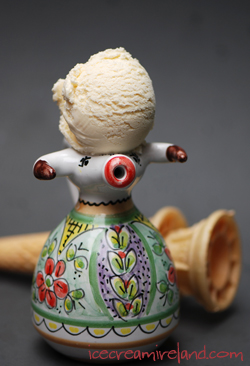 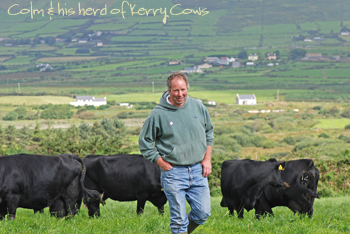 Since I’ve written so many times here about the Kerry Cow, I thought I’d give you the article I wrote this week for today’s Irish Times (the recipe will follow)…

When West Kerry farmer Colm Murphy first brought some Kerry cow milk to Murphys Ice Cream for us to sample, we were delighted. The test batch of ice cream came out smoother, creamier, and just plain delicious. The milk impressed our entire team, and our customers also responded to the improved taste, although most expressed bafflement when we mentioned the Kerry cow. “You mean a cow from Kerry?” It seems our indigenous breed has largely faded from our consciousness.

Once, however, the Kerry was indispensable. It is one of the oldest breeds in Europe (probably brought to Ireland from the Mediterranean by Neolithic wanderers) and the first developed for milking. Our ancestors churned Kerry cow butter, concocted Kerry cow cheeses, and stored milk treated with herbs in jars underground while other prehistoric people hunted and gathered with stone tools. So valuable was the Kerry that under Brehon Law the top unit of currency was the milking cow. There’s a traditional song, “I wish I had a Kerry cow, a Kerry cow, a Kerry cow…” No wonder it’s repeated. Your cows defined your wealth, and if you owned a few of them, you were doing ok. 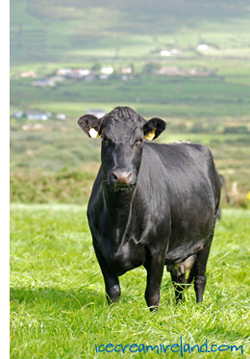 By the late 1970s, however, the value of a milking cow diminished to the volume it produced, and Friesans dominated the Irish herd. The little Kerry, famous for quality, not quantity, faced extinction. At the lowest point, only 100 Kerry cows survived worldwide, and half of them lived on Raymonde Hilliard’s farm in Killarney. When I took a break from our Killarney shop to visit her, Ms. Hilliard told me about farmer after farmer retiring or giving up their herds until saving the Kerry cow seemed a hopeless cause. Luckily, herself and a few other champions of the breed persevered, and the government finally introduced a protection scheme in the early 1980s. Since then, the population of the Kerry has slowly increased to its present total of 1,100. That may sound quite healthy, but to put it in perspective, there are 1,600 giant pandas in the wild, and they are considered extremely endangered.

Although there is still a decline of Irish dairy farmers, Colm Murphy is not about to give up. He loves his herd, and the Kerry cows impress him. “I’ve never had to lift the hoof of a Kerry,” he says, “and I have never had a problem with calving.” At Murphys Ice Cream, we don’t know about such things, but we do know we have never tasted better milk. This week’s recipe is “crema,” Italy’s most popular ice cream. Crema is an unflavoured frozen custard, perfect for savouring the flavour of Kerry cow milk – if you’re lucky enough to have some. 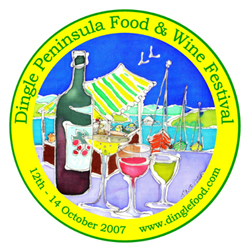 Even though it’s crazy this time of year, there are still preparations going on for the Dingle Peninsula Food and Wine Festival in October. So many people are helping including local artist June McIntyre, who did the painting for the logo. 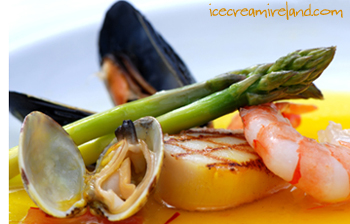 There will be food trails in the shops, tasting menus in all the restaurants, a kitchen set up in St. James’ Church for demonstrations, lectures, stalls, and even food films in the Phoenix Cinema.

It should be lots of fun for anyone into food, Dingle or both, and you can check out the festival website here.

I will add more information as it becomes available! 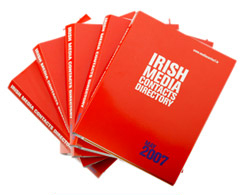 Jack Murray, the managing director of mediacontact.ie happened into our Dingle shop for a coffee a few days ago, and we had a chat about blogging and publicity. He was kind enough to send me on a copy of his media contacts directory, available as a subscription through their website. It is extraordinarily thorough (it includes print, broadcast, news agencies, associations, politics, government, and every last journalist even here in the wilds of Kerry) and well worth it for anyone doing publicity, whether it be their own or for other people…

A few weeks ago, I heard Daniel Cassidy on the Last Word with Matt Cooper. It was a lively interview, and Cassidy’s premise – that many American slang words originate from the Irish language – was an intriguing one.

I ordered the book, and it’s arrived. It’s more scholarly that I would have expected from the interview (turns out that Cassidy is a professor and founder of the New College of California), and the historical as well as etymological background is well-drawn. What’s really astonishing is that so few words in English dictionaries are credited to Irish (most of Cassidy’s English words are listed “origin unknown,” and when you think about the huge diaspora, it’s a certainty that the Irish would have contributed words to English.

Some examples from the book:

There are many more, and I highly suggest the book. At the very least it’s bound to lead to some interesting conversations!