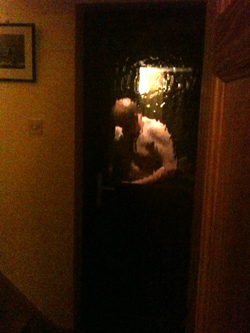 At 3:30 am, on Sunday morning, my partner woke me with a terrified whisper – “There’s a man in the house!”

My first thought was that we were being robbed, and (after checking that little Róisín was safely asleep) I pretended to ring the Gardai (my phone was charging downstairs), telling them in a very loud voice to come around. There wasn’t any sound downstairs, so I  went to the stop of the stairs, switching on the light. There, looking up at me, was a big man, perhaps in his late 30s.

What struck me, with a surge of adrenaline, is how lives could be changed with such a moment. If I hit him and he fell and hit his head, I’d be in serious trouble. If he had a knife, I’d be in serious trouble. Either way, things wouldn’t turn out well. It was soon apparent, however, that he was drunk to the point of hardly being able to speak. That made his being in the house less sinister, but still I had no way of knowing whether or not he was a violent or a gentle drunk. I bundled him out the back door and locked it.

I rang the Gardai in Tralee (Dingle Gardai go off duty at 3:00 am), and they told me once he was outside there shouldn’t be a problem. I’m guessing they had more serious matters to deal with on a Saturday night. Meanwhile, outside, the man started taking off his clothes, and he kept trying to open the door (although not in a violent manner).

Worried that he’d die of exposure or fall and hit his head, I went outside. Again, he didn’t seem violent, but he was so drunk that it was hard to know what he would do. I told him this wasn’t his house, helped him into his clothes, and brought him to the front of the house. I asked him where he lived or where he was staying, for I would have walked him home, but he couldn’t tell me. I asked him if there was someone we could ring, but he shook his head. All he said was, “My wife will kill me.” Finally, he stumbled off down the street toward town.

We had trouble falling back to sleep, but in the scheme of things, we were quite aware that although shocking to have someone come into the house, no harm had been done. I had forgotten to lock the front door, and my partner made me promise I wouldn’t forget again.

The episode made me think about Ireland and drink. Although per capita drinking has fallen in Ireland, we still top the table in terms of binge drinking. It’s the latter that landed the fellow into our house and has been the cause of so many problems with fights, with full accident and emergency wards and heartache for friends and family. We still don’t take binge drinking seriously as a nation, and a great number of people don’t think it’s a problem at all.

I think it’s a problem, and I’ve thought that for a while. I don’t have any answers, and I’m not going to make any campaign on the issue. I’m not prudish about drinking, and in fact had been to the pub myself the same evening for a couple of pints and some conversation. A couple of pints, however, is a very different thing from drinking yourself into a state where you don’t even know where you live.

Besides making me understand the preciousness of one’s family and how much we need the feeling of safety in our homes, the man in our house also helped to clarify thoughts about our own shops. 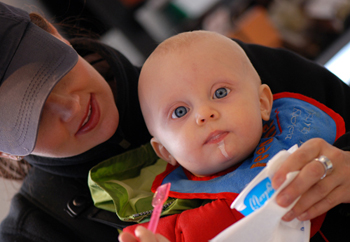 We’ve talked before about whether we should get a wine license or how cool it would be to serve alcohol over ice cream (vanilla with a shot of Bailey’s, etc). I think now that I’m very happy that we have a safe, alcohol-free, family environment. We’re not going to change anything about Ireland’s difficult relationship with drinking, but I feel good that we can offer a little alternative world, where the only binge will be an overindulgence of ice cream, chocolate or coffee. 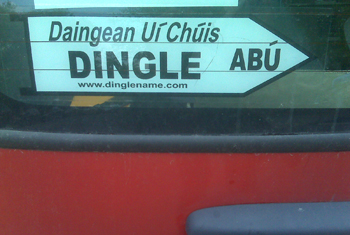 This photo was sent in from my US correspondent, Cynthia. It was on a car in Brooklyn, NY. Looks like the Dingle name battle has some far flung warriors!

For those of you who like to run, there has been a road race, the  Killarney Maxi Marathon, announced for Killarney, to take place on July 17th. The route looks spectacular, so it could be the perfect way to whet the appetite for some ice cream! If you want to run for charity, the official charity partner is the Marie Keating Foundation. 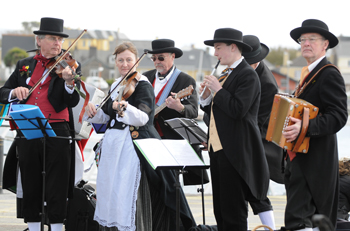 I’ve been remiss in posting, but it’s been a busy Easter in our shops, especially once the sun finally came out. 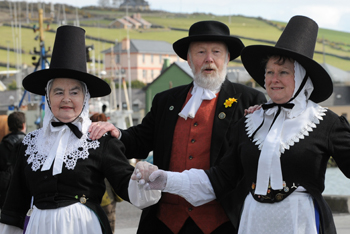 This week, Dingle is hosting the Pan Celtic Festival, and the festival certainly seems to be blessed as there were many of us here who looked at the schedule with some amusement since so many events were scheduled to take place outside, and the weather for the two previous weeks was ferocious. However, the rain passed, the sun’s been shining, and we’ve been treated to the colourful Welsh (photos above) as well as other musicians and dancers about the place. 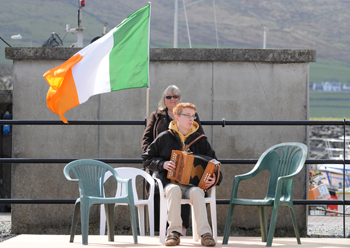 The fierce gale of Easter Monday and the freezing weather before that is quite a hazy memory at this stage, and there are many in Dingle who have brought out summer dresses and short sleeves and started talking about whether we might just have a bit of good weather over the summer after all. It’s been three bad summers in a row, but when the sky above is blue, when there’s music on the streets and the scenery of West Kerry looks it’s best, it’s hard not to feel a burst of optimism and start to dream of beaches and barbecues and sultry days ahead…

One of the nicest things about having a shop is that a day is often full of surprises, since you never really know who will walk in the door. This video shows the day’s best surprise – a family who had a song about their West Kerry holiday, and their little boy performed the song for me, since it featured our ice cream and waffles in our seasonal Tig Aine shop.