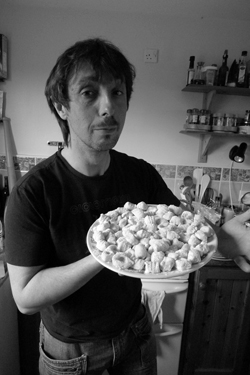 Any of you who have been coming into our Dingle shop for a while, might remember Davide who was with us some years back. He’s back living in Turin, Italy now (he’s a social worker doing good deeds in that city), but he’s in Dingle for a short holiday and came over for lunch. Not only that, he whipped up some gnocchi. Mmmmm! Turin is lucky to have him! 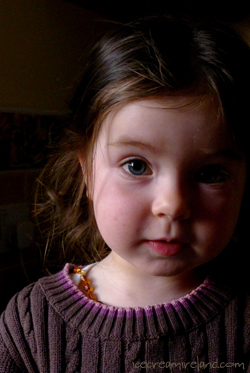 I promised a little while back that I’d let you know how I was getting on with the Leica D-Lux 5, and I’ll finally get around to it here.

I don’t think there’s any point for me to go into the technical stuff, since you’d find that readily on the web. Rather, I’ll simply give my impressions and a few examples and hope it’s of some help. After all, I’m not a pro – it’s just my opinions! 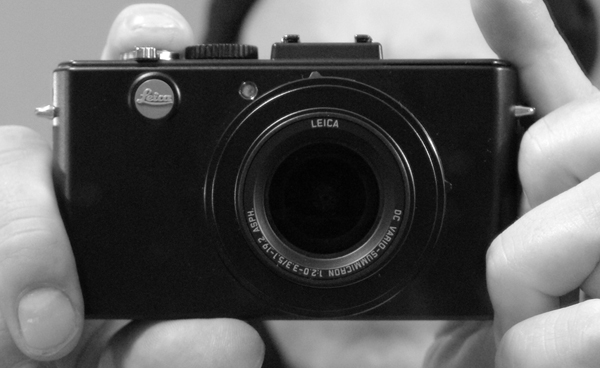 First of all, I’ll state the negatives, starting with the obvious: it’s a compact camera, and so there are limitations that come along with that – especially from the small lens and small sensor. Although most images are good enough to use, there are times where there is more pixelation than with my Nikon D300, and the pixelation is a bit rougher. You also don’t have the same sense of depth of field as with a longer lens.

It’s also not as speedy – no firing of lots of frames per second. However, it’s much faster than my previous D-Lux 2, which was hardly usable on anything that wasn’t stationary, and I haven’t found it too slow. 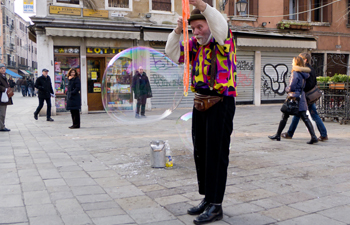 Now the positives. First – it’s light, tight, and tidy. After bringing it to Venice and elsewhere, it’s getting harder and harder to convince myself to drag out the big camera and heavy lenses. You can have it in your coat pocket, just in case you see something interesting.

Next, the colour rendering is absolutely fantastic, especially in tricky light situations. This camera consistently delivers the closest colours to what my eyes see of any digital camera I have laid my hands on. In the photo above of Róisín, that’s exactly how she looked and how the colours looked. It was a tricky enough shot for most cameras – a dark kitchen with the last evening light coming in from a nearby window. 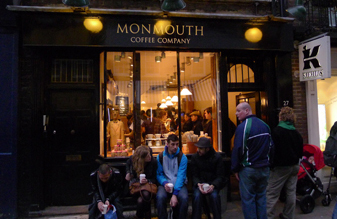 Another example is this photo I took of Monmouth Coffee in London, just after dark. It captures the cold streetlight outside, and the warm glow inside. That’s exactly how it looked, and I didn’t fiddle with settings – I just snapped a shot. It’s a situation most cameras would find a bit of a struggle.

Another big plus is how it handles low light – it has a 2.0-3.3 lens that’s a vast improvement over previous models, and they’ve improved the software as well. It delivers usable shots up to 1600 ISO. 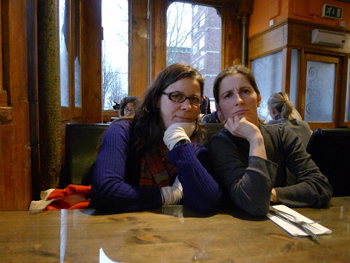 It also does extremely well in contrasty situations. In the photo on the right, the main light source in this darkish London cafe was the window directly behind Manuela and Cara. Not only did the camera keep their faces bright enough, but it managed to deliver excellent colour and even keep the detail outside in the primary light source. My Nikon would not have managed that. Either the window would have been blasted out white, or the faces would have been dark or both. You’d never know, looking at the shot, how dark it was inside. 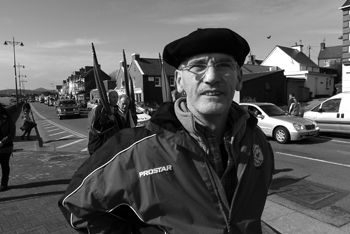 There’s been lots of discussion on the web (and indeed among photographers I know) whether it makes sense to fork out more for the Leica brand when the Panasonic LX5 is identical in terms of hardware, including the lens (Leica is owned by Panasonic). The only difference appears to be the software – how the cameras render an image. That might seem a small difference, but to me the feel of a photo is worth quite a bit.

My father has the Panasonic LX3, and I haven’t found the images comparable to either the D-Lux 5 or my previous D-Lux 2 (and both of us are simply happy snappers, not professionals, so it really seems to be the software). The photo of Declan on St. Patrick’s Day is a good example – I just snapped it off, but it has a nice mood to it. 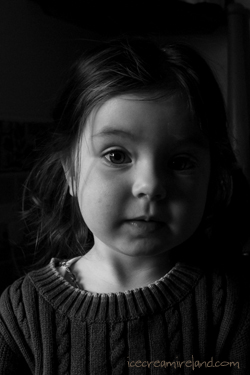 Which brings me to the black and white settings and processing, which are great. With past cameras, I’ve shot colour and converted it to black and white in Photoshop. With this camera, I’ve been using its black and white option quite regularly with good results. One of the nicest features of the camera is that you can set it to fire a burst of three shots that you set differently – at the moment I have it set for colour, black and white and black and white high contrast. So this last photo of Róisín was shot in a burst with the colour one at the top of this post. It’s a feature I love!

Anyway, I can recommend this camera to anyone who loves photography but doesn’t want to lug around heavy kit. It’s very expensive for a compact, but I think it delivers value, since although you won’t get the quality of a good SLR with good lenses, it’s reasonably close for most purposes and costs a whole lot less. 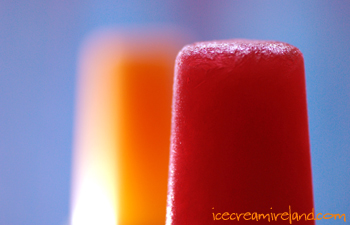 We’ve been playing a little with popsicles, which might well make an appearance in our shops, and I’d love feedback – what’s your ideal frozen ice cream on a stick? Just fruit? Ice cream coated in chocolate? Yoghurt? Any other ideas or favourits?

Also, I’d appreciated if you vote in the handy poll below:

If anybody wants to watch last night’s program on what Government ministers can do to help the economy (I make an appearance 7 minutes in), you can check it out here. 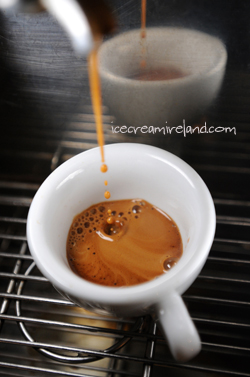 My sister drew my attention to this welcome article, which reports that the Karolinska Institute in Stockholm has completed a 10 year study of 34,670 Swedish women, ages 49 to 83, that showed that people who drank at least a cup of coffee a day had a 22% reduced rate of stroke.

So, get percolating, extracting, or just plain drinking!

It looks like Maureen O’Hara will be coming to Dingle for a screening of the Quiet Man at the Dingle Film Festival. Come on down if you can! It’s a fun few days, especially for a cinephile.