We have been spending a lot of time these days talking about chocolate, and being chocoholics there are worse conversations to have!

Over the last six years, we have had an on-going discussion about Valrhona vs. Callebaut. We originally used the Callebaut for everything, then switched to Valrhona two years ago. The difference in

taste is immense – the Callebaut is deep and rich, the Valrhona is clean and simple on the palate. Valrhona is a much smaller company, and they have a top reputation among the gourmet community. In terms of eating chocolate, we wouldn’t touch another. But things get complicated with ice cream. Often “cruder” flavours taste better when they are combined with the ice cream mix…

In any case, we did a test for chocolate sauce using both, and liked the Valrhona better on its own, but the Callebaut better when served over vanilla ice cream.

If you want to try our recipe, here it is: 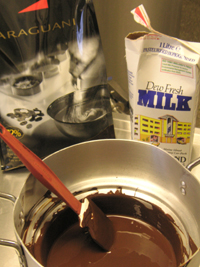 Follow these instructions carefully if you want a velvety, glossy result:

8 thoughts on “Chocolate and Chocolate Sauce”