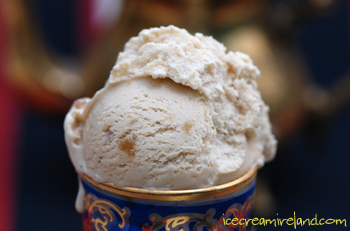 A reader of this blog emailed me asking for a green tea ice cream recipe, so here it is! It’s a recipe that will be in the upcoming book, and it’s one I love.

In New York, where I grew up, Asian food was part of the staple diet. Whether Japanese, Thai, Vietnamese, Chinese, or Korean, the standard was high and the variety amazing. Some of the best meals I have ever eaten were Asian cooking, and my dessert of choice, when available, was green tea ice cream. 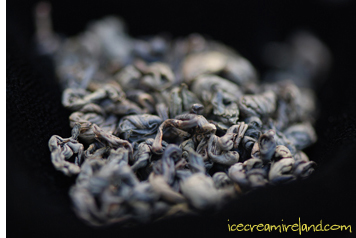 Here in Ireland, I have also come across green tea ice cream in some of the ever-proliferating Asian restaurants, so perhaps you have tried it as well. If so, just be aware that since we don’t believe in food colouring, we use green tea leaves (see photo right) and not the matcha (green tea powder) that is usually used for ice cream. This means thatÂ it will not be bright green and will have a slightly different taste, but I think it’s even more delicious.

For this recipe, I like to add crystallised ginger, a real favourite of mine. I love the spicy sweetness and intriguing consistency of the ginger, and since it’s coated in sugar it stays soft in the ice cream.

To pasteurise the eggs, heat the custard to 73C and maintain that temperature for at least 5 minutes. Use a cooking thermometer, though, and keep stirring! If the custard goes any higher than 76C, the eggs will scramble. Immediately cover and place in the freezer until cool.

I’m sure you all know about Google News, but I’ve just discovered it. What fun! I looked up “ice cream,” and here’s what I learned after reviewing the news in the world of ice cream:

1. Ice cream is just as prone as anything else when it comes to changing tastes.

2. The ice cream trade is far more violent than I had ever expected, living and working in the safety of Co. Kerry. A few examples:

3. Ice cream could be a potential decider in USA politics.

5. Never underestimate the effect of sweetening up your customers!

7. Ice cream theft (as tempting as it might be) is still theft.

8. You can make ice cream out of snow, but avoid yellow patches!

9. You don’t need racing cars for a Grand Prix.

10. If you’re in the ice cream business, pray for a heat-wave.

Ah, that has me dreaming here in the cold of February. Heat-wave? That’s not likely to happen any time soon. I bet that statistically there’s a better chance of a monkey god appearing in a nearby tree… And, by the way, any US Presidential candidates are welcome to come to Dingle or Killarney for an ice cream if they are looking for an endorsement! 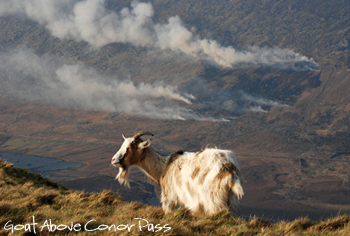 The sun has been blazing down in Dingle. Well, sort of. The weather has been stupendous up until today, and that means that farmers have been burning gorse to clear pasture up on the hills before the seasonal ban comes into effect. According to a friend, there were more than 100 fires in the Dingle area yesterday. 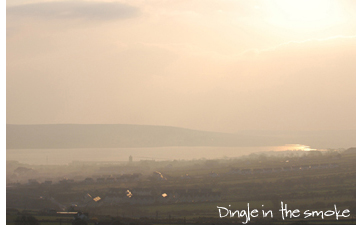 The smoke, oddly enough, had no intention of rising and floating away. Instead, it meandered down into town, where it settled in and made itself at home. The photo on the right was taken in the middle of the afternoon, and it sure was murky.

So what do you do if you want to take a stroll? We drove up to the fresh mountain air at the top of Conor Pass.

There, in the parking lot, we were greeted by a goat. Yes, indeed, she (I think it was a she, even though she had a beard) trotted up to the car and bleated for attention. She looked to be feral (Dingle used to be known for wild goats) and seemed somewhat arthritic, which is perhaps why she was hanging around looking for handouts. I sadly didn’t have any ice cream on me, but an apple core, tossed from a passing car, interested her greatly. 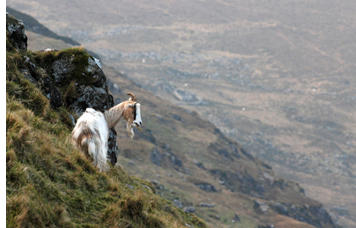 She didn’t much like to be petted, perhaps because one horn appeared to be damaged and was wrapped close to her head, so we left her and headed up the hill. She bleated a few times and then followed.

We walked, and she trotted along behind for the first 500 meters or so, before she became distracted by an especially tasty patch of grass. She raised her head andÂ bleated out an invitation for us to join in the grazing, but we politely declined and kept walking. 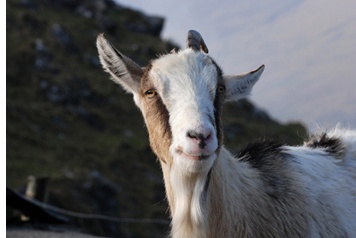 When we returned, she was back in the parking lot, scaring a car-full of tourists who were put off by her over-eager approach. I tried to pet her again. She butted away my hand, maybe offended that we had spurned her grazing invitation.

If she sticks around, she could become a permanent fixture on the Conor Pass like Fungie in Dingle Bay. I’d say she would take some getting used to, however, to judge by the haste with which the tourists drove off and by my slightly sore hand. Maybe those folks in Killorglin know what they are doing, sticking their goat high up on a pedestal, but I don’t know. A goat up close and personal is kind of fun. 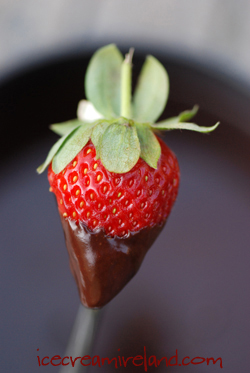 I think there is nothing more romantic than chocolate, so what better thing to make for your loved on than chocolate fondue? There is something so sensual and luxurious about melted chocolate over fruit and other tasty items, and the very act of dipping and sharing fondue makes it special. 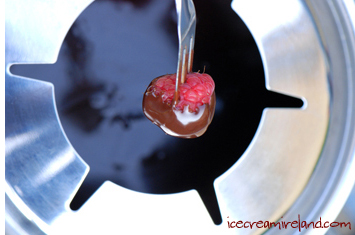 As with all things chocolate, start with quality. Find a good, dark chocolate and there is little chance that the end product won’t be delicious.

I like a bit of Port in my chocolate fondue, especially when you’re dipping fruit. If you want even more of a kick, add an extra teaspoon!

My five favourite things to dip into chocolate fondue:

I’m sure you can think of many other delicious things to dip! 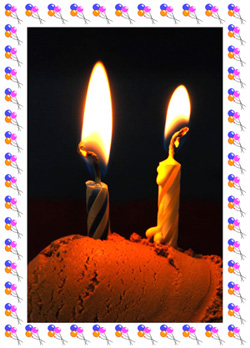 Today is the second birthday of Ice Cream Ireland. I can’t quite believe it, but this blog is about to enter the terrible twos and its third year in existence.

The last year has been quite amazing and there have been so many high points including the Blog Awards, the book, the Irish Times column, the pre-election “Caught with Ice Cream” series, launching ice cream into space, reaching 80,000 blog visitors (astonishing to me), seeing so many new and interesting Irish bloggers, and all the fantastic comments, support, suggestions, and links from so many of you.

Thanks so much to all my readers.

Now, it’s time to blow out the candles and eat the ice cream! 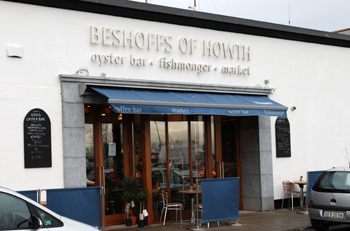 My brother and I spent the last few days driving around Dublin peddling our ice cream, and there’s much activity in the food world – at least on a retail level. In Howth, Beshoff’s (photo above) has opened a fantastic gourmet shop with a drool-inducing fish counter and a smashing oyster bar run by their neighboring restaurant, Ivans. We couldn’t help dallying and had one of the tastiest lunches in recent memory. Well worth a detour. 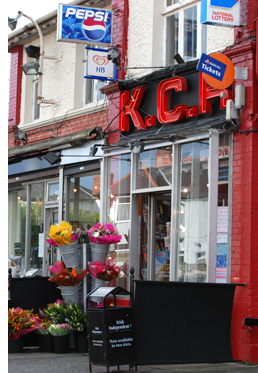 Fresh (who oddly don’t seem to have a website) have added on a couple of stores, and Superquinn is also expanding. Their latest shop is in Ranelagh, with impressive glass frontage on the Main Street, and perhaps to counter this incursion, Morton’s is in the process of expanding to double their size. Already one of the best shops in the country, Morton’s will be even more stunning when it’s complete.

Donnybrook Fair, meanwhile, have taken over the K.C.R. garage in Terenure, and its location is sure to make it a success. Exciting times for a foodie!

Finally, we headed to the Digital Media Awards last night, and I must congratulate Feebee who well deserved to take home the award for best blog. Unfortunately I didn’t get to meet her or Deborah on the night, but we did share a table with some lovely people from Dublin Tourism, who won an award for a great idea – iWalks – podcast tours of Dublin. I could have used a good walk after all that eating and driving…

My brother Sean and I have headed to Dublin to visit some accounts and attend the Digital Media Awards tomorrow night. Tonight, we decided to splurge and feast at Thornton’s. Here’s a video of the desserts. Mine was a warm chocolate tart with raspberry sorbet and rasberries. Sean had a blood orange souffle with mandarin sorbet. Memorable!

For those interested, Kevin Thornton has a lively blog here. 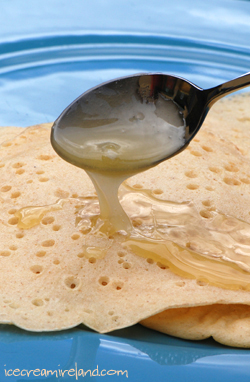 Today is Shrove Tuesday, and while elsewhere in the world people are dancing and singing with Mardi Gras and Carnival, here we eat pancakes. Although I’d much rather be cavorting on the streets of New Orleans or Rio, at least I can console myself with a sweet traditional meal before we head into Lent.

Two years ago at this time, I was in Morocco, and there I came across amazing pancakes called Beghrir. They are served with honey and are oddly pock-marked. Here’s a recipe, in case anyone wants a pancake that’s as tasty as it is unusual.

Note: Traditionally these would be eaten with honey mixed with butter and warmed in a pan. The ratio, if you want to try it, is 1 part butter to 4 parts honey. Simply combine them in a pan and cook over medium heat until the butter melts. Remove immediately from the heat and stir until smooth.