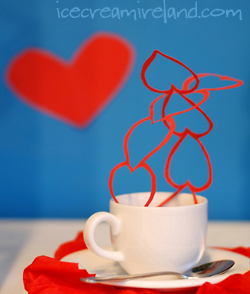 Here at Ice Cream Ireland, we’re fans of Valentine’s Day, which is coming up fast. Love is always a good thing to celebrate, and loved ones can always use the extra attention. Besides, any tradition that involves eating chocolates is a tradition I can happily get behind.

So what is Valentine’s Day anyway? A bit of history:

The Romans Know How to Party

Valentine’s Day is probably based upon the Roman holiday of Lupercalia, a fesitival celebrating the Goddess Juno Februa. The name probably comes from Lupus (wolf in Latin) in honour of the wolf that suckled Romulus and Remus, who are credited with founding the city. It is said that one of the traditions including men randomly picking love poems (written by women) from an urn, and thereby selecting their partner for the duration of the festival.

The Church Has a Better Idea

In 496, Pope Gelasius I declared the 14th of February a feast day in honour of St. Valentine. Which Valentine is a bit of a mystery, as there were at least three St. Valentines, at least two two of whom are thought to have been martyred on February 14th (possibly the most important of the three was a Gnostic Christian in Alexandria, who wrote and preached about love).

One of the most prevelant stories about St. Valentines is that he was imprisoned and martyred for perfoming Christian weddings after they were banned by Emperor Claudius II. Another story is that the daughter of his jailor fell in love with him after he miraculously restored her sight, and when Valentine was being led off to his martyrdom he left her a little note, naturally ending “…from your Valentine.”

The relics of one of the St. Valentines (Valentine of Rome) were given by the Holy See in 1836 to the Whitefriar Street Carmelite Church in Dublin, where they are stored.

Or Is the Day Norwegian?

In Norway, this time of year is dedicated to the god Vali, son of Odin, and called ‘Lios-beri’ or light bringing. Vali was worshipped as an archer and said to be the awakener of tender thoughts and the patron of lovers.

In 1382, Chaucer made the first literary romantic reference to Valentine’s Day in his “Parlement of Foules.” He wrote, “For this was on seynt Volantynys day, Whan euery bryd comyth there to chese [chose] his make [mate].”

Romance? Has to be the French

The earliest surviving Valentine’s is a poem by Charles, the Duke of Orleans, to his wife, written while he was imprisoned in the Tower of London in 1415.

Who Made It About Chocolate?

The first Valentine’s chocolates were marketed in a heart-shaped box by Richard Cadbury in 1861. Solid chocolate as we know it was a recent invention at the time! 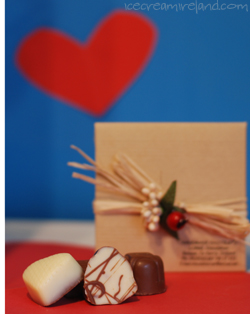 1. Spice Things Up: Make the Aztec Hot Chocolate. Both chocolate and chilli peppers are generally thought to be aphrodisiacs.

2. Go Over the Top: Champagne Sorbet will always get a bit of attention. Serve it with fresh fruit or chocolates.

3. Get in the Spirit: Be creative in serving up some ice cream with alcohol such as the black and white cocktail, though that one might need a bit of colour!

4. Feeling Saucy? Make some chocolate sauce. Use it to dunk fresh strawberries. Of course there are other uses for chocolate sauce, but that is none of my business!

5. Chat them up: Take time for a romantic chat over a cup of coffee. Naturally, bring out the chocolates. For an extra bit of sweetness with your coffee, try an affogato. 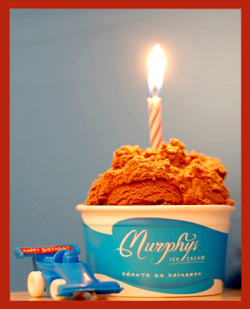 Today, Ice Cream Ireland turns one. Yes, it’s been a full year since I started this blog while on vacation in Morocco in February 2006! Thanks to almost 20,000 of you who have checked out the site, and especially those of you who have found your way to Murphys Ice Cream.

There have been several high points to my first year of blogging including:

I’ve put together a little poll to help me with my focus over the next year, and here it is:

Happy St. Bridgets day! I haven’t done too much in terms of links recently, so here are a few Irish blogs to keep an eye on:

I know this has nothing to do with ice cream or Ireland, but one of my best friends in the States, Cynthia Wade, has won a special jury prize at the Sundance Film Festival for her documentary film, Freeheld. Based upon Laurel Hester, a dying police lieutenant who wants to leave her pension benefit to her same-sex partner, the film is about love and battling injustice. If you want to support the film or get more information, click here.

I am so proud of you, Cynthia. Well done!

Seems like a viral thing is going around, and I have to blame ConorÂ for getting me involved. Still, I’ll be a sport, especially since I’ve had an attack of blogging laziness over the past few days, and this might get me back in the swing…

So, five things you don’t know about me, the ice cream man: 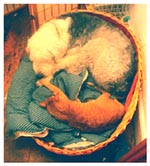 1. My brother SeanÂ and I used to share a house near Dingle, and when he decided to go and get married (and I got turfed out), there was naturally a custody battle.Â

After all, we both raised the two wee ones, whoÂ had grown up together since they were babies and had overlooked all their natural differences and propensities to become best of friends.

In the end,Â Sean and IÂ settled amicably. HeÂ got custody of the dog, and I the cat. We both get visitation rights…

3. I have a degree in philosophy. So why ice cream, you ask? Well, I could get philosophical about it, but instead I’ll just say it’s better than drinking a cup of hemlock…

4. Maybe it’s my philosophical nature, but I believe cats can be trained as well as dogs to do tricks. Of course, you do need infinite patience, but I’ve proven it is indeed possible.Â My latest project is to teach an old cat new tricks, and I thought it would be fairly winning if the fellow could beg. Don’t believe me?Â See the picture introduced as evidence… 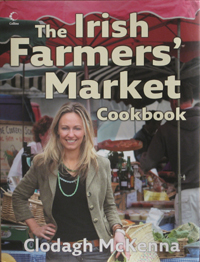 Â Before I write anything about Clodagh McKenna’s new cookbook, The Irish Farmers’ Market Cookbook (which no doubt will be one of the hot sellers this Christmas), I must state that I am very biased. I’m a big fan of her efforts in the Slowfood movement,Â her various shows such as Winter Food,Â and of her support for farmer’s markets. As well as that, she’s delightful in person, and she has included one of our recipes in the cookbook (Murphys white chocolate and rosewater ice cream).

The philosophy of the book is: use good ingredients (with love) and the final product (meal) will be good. Her recipes are a delicious excuse for exploring Irish food and ingredients. She writes “The markets… have given us back a connection with the food we are consuming. I’ve written this book as a celebration of all of the fantastic produce we have in Ireland…” Definitely a worthy sentiment!

It’s amazing how few food blogs there still are in Ireland. As far as I know, these are the sum total of blogs dealing primarily with food or drink (excluding myself, of course):

Am I missing any? Why aren’t there more? 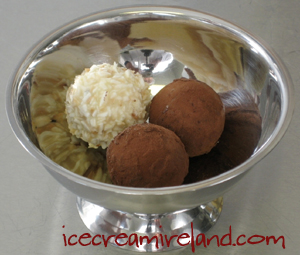 Today was most enjoyable as we were lucky enough to have Monsieur Frederic in production, sent from one of our suppliers, Odaios Foods. 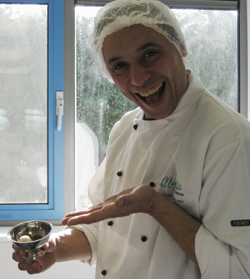 We had asked for suggestions for improving my ice cream truffles (they had happily received the samples we sent up) and in enhancing the decoration of our ice cream cakes. They have an interest in such things, since they are also our distributor on the East coast, and they kindly sent a very helpful consultant chef. 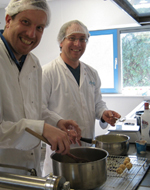 For the truffles, I made a base of passionfruit and peach schnapps ice cream, and we filled it into chocolate shells, then rolled them in toasted coconut or cocoa. Quite tasty indeed.

Then we moved on to decorating ice cream cakes, playing with enrobing the whole cake in chocolate.

Fred was full of ideas, and it was the first time in ages that both my brother and I were together in production with the pots and the pans. We should have more days likes these!