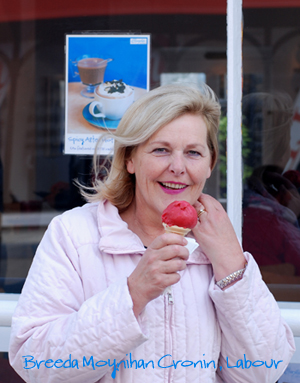 Here’s the fourth in the series of candidates with ice cream. My mother met the chairperson of the Labour party andÂ TD for South Kerry on the street in Dingle and enticed her to our shop for a photo.

Ms. Moynihan Cronin was delightful to meet in person, and she was happy to find a dairy-free option in our Raspberry Sorbet. She has a house in Ballydavid and apparently some nieces mad for our ice cream. If the opposition get into power, she is bound to be appointed a minister.

(In case you were wondering, the poster behind her is for our Aztec Hot Chocolate, recipe here.)

A couple of people have asked about the article in yesterday’s Irish Independent about us and blogging. You can find a longer on-line version of it here and here. 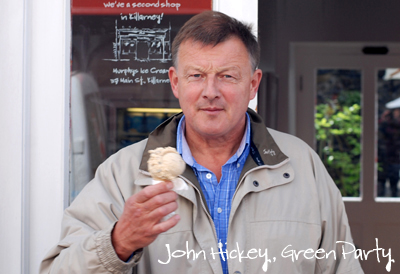 Here’s the third in the series. It’s great to know that the Greens like ice cream!

I met John Hickey, the Green candidate at the Dingle farmers market. He was kind enough to come back to our shop for a photo. He lives locally (near Annascaul), and we had a good chat about how we could use green energy in our factory. 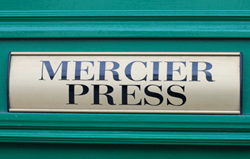 A few weeks ago, I was contacted by Eoin of Mercier Press, who expressed interest in the possibility of an ice cream book. So my brother and I went down to Cork to talk to him, and I think it went well. It’s quite an exciting prospect!

Obviously there is nothing definite at this early stage. I’ll keep you posted on developments…

Eoin, by the way, has an excellent blog about the love of books and publishing issues. You can find it here… 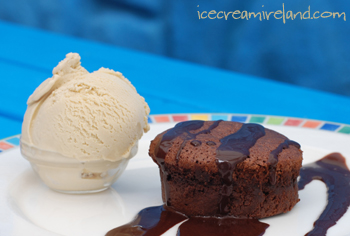 I have written about Francois Payard’s book Simply Sensational Desserts a couple of times here. It really is my favourite pastry book.

I had a severe chocolate craving a couple of nights ago and tackled his chocolate souffle, which is made in individual ramekins. This is a superb dessert. 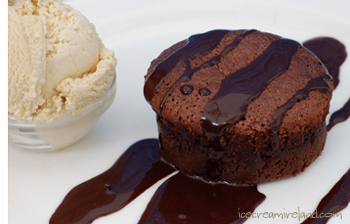 He suggests pistachio ice cream as an accompaniment, and I found the pairing spot-on. (In case you are wondering why our pistachio is not green – well, we don’t use food colouring…)

The photos don’t really do it justice, since the souffles should be served  right out of the oven, and had fallen quite a bit by the time I got to taking a photo (the next morning).

Again, if you love baking, the book is certainly worth the price. 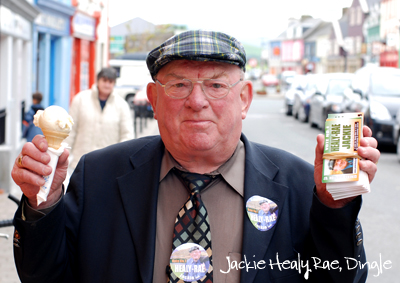 Here’s the second in the series! I think for the next one I should ask some pertinent questions such as “What’s your position on ice cream?” If anyone has any ideas for ice cream, chocolate or coffee related questions for the candidates, let me know…

In case anyone was wondering, here’s the fact file: 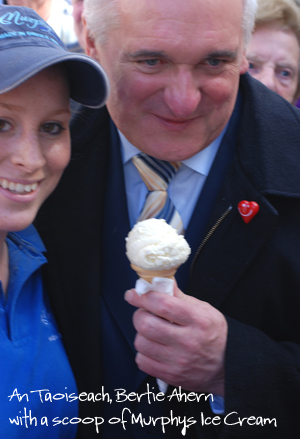 Maman Poulet writing on Irishelection.com a little while ago, put the idea into my head that I might get a photo of Jackie Healey Rae with an ice cream. 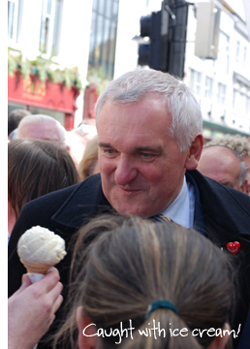 I’ve been thinking it isn’t a bad idea at all. In fact, my brother and I had always talked about a “Caught with Ice Cream” series, where we might stick our ice cream into the hands of various people and take the photo.

If we were to start with candidates in this tight election year, how many would pose?

Today I received a tip that Bertie Ahern, the Taoiseach, would be in Killarney. Why not? I grabbed the camera.

Deirdre, from our Killarney shop, kindly assisted by scooping and passing the cone to Bertie so that I could snap the shot.

Although there was a big crowd around him, we got through, and the Taoiseach was gracious. I didn’t get as many photos as I had hoped since I was muscled out of it by members of the legitimate press who couldn’t resist the ice creamÂ photo opportunity. Still, it was a good start.

Now, who is next?

We have long wanted toÂ improve the chocolate squares we serve with coffees in our shops, and I’m sure our customers will be delighted to know that we’ve reached agreement with Valrhona to serve their little chocolates in our packaging.

We have a choice in terms of which chocolate we use, so feedback please!!!