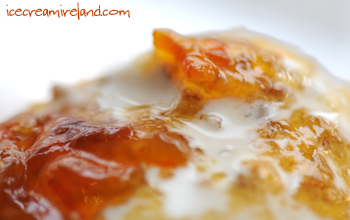 As part of the Dingle Food and Wine Festival, we’ve decided to do an Irish theme. It seems especially pertinant in these times, and we should be able to have some fun with it. We are going to do specials like Barry’s Tea Ice Cream and a Biscuit, Dark Chocolate Ice Cream with Irish Whiskey Cream, Bailey’s Ice Cream with Dingle Blackberry Sauce, and Brown Bread Ice Cream with Caramelised Orange Marmalade.

The last one sounds a bit strange, but everyone who has tried it has been delighted. It’s an odd sensation of eating ice cream while your brain is telling you you’re imbibing that old breakfast standby of brown bread and marmalade.

I caramelised the marmalade to make the flavours a bit deeper and complex, and it’s an easy thing to do and could have many applications. Here’s a recipe: 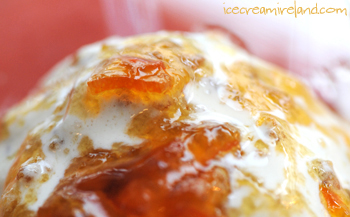 1. Empty the jar into a high-sided saucepan or pot.
2. Add water – use 20% of the volume of the jar.
3. Cook on high heat, stirring from time to time, until the marmalade turns a deep brown colour. Be careful – it will be extremely hot, so beware of splatters.
4. Remove from the heat and stir in more water – again, use 20% of the volume of the jar.
5. Serve warm over brown bread ice cream.