I’m a pretty laid-back fellow, but certain things really get to me. One of them is the disregard of any form of government to the wishes of its people.

In Dingle, we’ve had a famous battle over the name of the town. Whatever one’s stance about the issue (and I understand arguments on both sides),

the fact is that the town held a plebescite, and 96% voted for “Dingle/Daingean Uí­ Chúis.” It’s now a year and a half later, tourists are still confused by the use of “An Daingean” on the road signs, and the government still hasn’t honoured the wishes of the people.

In an even more worrying development, Kerry County Council launched a Traffic Plan for Dingle a year ago, which I wrote about here. Basically they wanted to remove almost all of the parking from the centre of town and create satellite parking around the edges.

For most of the year, Dingle is a tiny market town of 1,800 residents, without any traffic problem outside weddings and funerals, and removing the parking would be a disaster for businesses and forÂ quality of life (would you really hike 10 minutes in a January gale to grab a coffee, visit friends, or do your shopping?)

There was uproar about the plan a year ago, and most of the businesses, associations, and residents sent in opposing submissions. Do you think Kerry County Council paid any attention to the submissions? It seems not. They just launched a new traffic plan that still takes away the parking. I haven’t seen it yet, but it appears that instead of removing 130 parking spots, they now propose to remove only 122. Very generous.

They say it’s a new plan, and so the old submissions are invalid. All the submissions need to be re-done. For what? To save another few parking spaces? I think they could have a battle on their hands this time. Stay tuned… 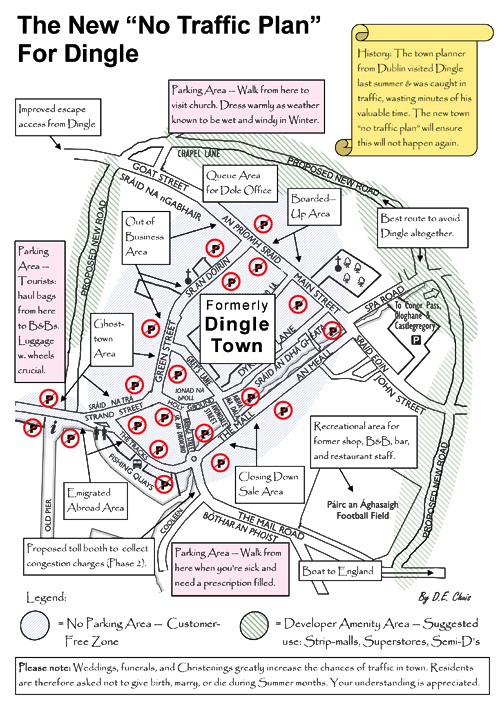 P.S. In the interest of fairness, I have heard from both the press officer of Kerry County Council and a local Counciller who say that this is just a draft, that they are open for input, and that submissions will be taken seriously this time around. Let’s hope so!

10 thoughts on “No Democracy (or Parking) in Dingle”