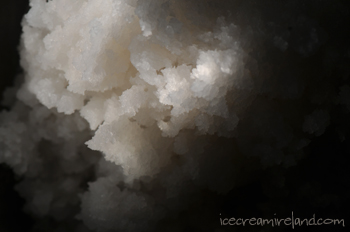 One of our new ice creams for our new flavour array is sea salt ice cream, and I got to wondering how it would taste with salt made from our local Dingle sea water. So, the other day I decided to make salt.

It started with a trip to the beach, which is never a bad thing, especially on a sunny day. I took along the partner and the little one, and we made an afternoon of it. 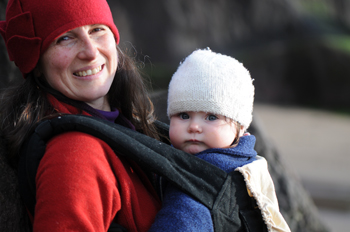 Róisín is a bit too young to be interested in the science part of making salt, but she sure loved the fresh air and looking at the waves.

I’m thinking kids a bit older would enjoy such a project and would be quite amazed to see solid white crystals appearing out of a clear liquid, though they would need a bit of patience. If you want to try it, here’s what I did.

How to Make Sea Salt

1. I started with 5 litres of Dingle sea water (note – make sure the area where you get your water is clean and free from pollution). 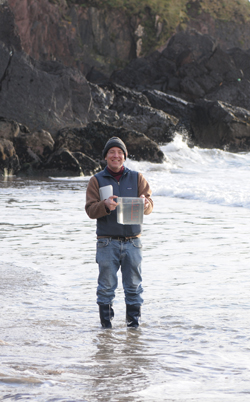 2. I passed the water through a coffee filter to make sure there was no sand or tiny bits of seaweed.

3. I boiled the water in a large pot until the salt had begun to crystalise and there was about an inch of liquid left (you might need to scrape the bottom of the pot now and then as the salt begins to form). This takes several hours and produces a lot of steam!

4. I turned off the heat and left it uncovered to evaporate overnight. I don’t know if this is necessary, but I didn’t want to burn the salt by mistake.

5. In the morning, the water was gone, but the salt was still moist. I spread it on a baking tray and put it in the oven at 100C for an hour, at which point the salt was dry.

The salt has quite an interesting flavour – more delicate than I would have thought. You can taste the mineral content, and it oddly has a hint of sweetness. Now, I’ll have to turn it into ice cream!

P.S. I was just informed by a science teacher that if you dangle a string into the boiling seawater, once it’s reduced a bit, maybe attached to a rod that can sit on the pot and with a weight tied on the end in the water, that the salt crystals grow on the string. That might have more dramatic effect if you’re making it with kids. I’ll try it next time.