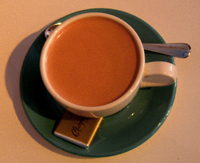 After my last post, I decided to revisit the hot chocolate recipe I gave here and check it against the Pierre Herme cookbook. Certainly the master of sweet things would have much to offer.

His take on hot chocolate has the following differences to my recipe: he uses water instead of milk, and he adds quite a bit of cocoa as well as the chocolate. In my opinion, the result was less than optimal, with the taste of chocolate blunted by the sensation of the cocoa and the water making it less luxurious.

There’s a funny thing that happens with bitter things such as coffee and chocolate, and that is that you need sweetness to taste the flavour. It’s said that we’re hard-wired to like sweets and avoid bitter tastes, since most poisons in nature taste bitter, and so bitter things are an acquired taste (kids very rarely like coffee or bitter chocolate). Bitter things are delightful as we get older, and I’m a big fan, but there is a balance to be struck, and the Japanese refer to it as “umami.” 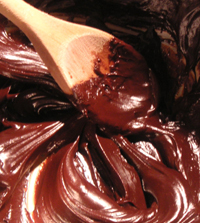 To me it’s the same as coffee. Virtually all Italians stir at least two sugars into their espressos. There is a reason they do so, and that is to bring out the coffee flavour. Espresso without sugar simply tastes bitter. Espresso with sugar tastes of coffee. Try it, if you like, adding sugar in small amounts, and you will see that the full flavour of the bean will emerge.

Anyway, it pains me to say it, but I do believe there is a thing as too much chocolate. I happily stand behind my earlier recipe!