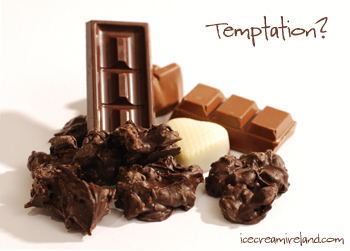 As we head into Lent, here’s my third “Things to Give Up” list.

As anyone who has followed this blog knows, I’m very fond of chocolate and feel it’s not really the best thing to give up, especially since the Vatican made a pronouncement in 1662, specifically allowing it (at least in drinking form – more here). Besides the panic I feel at the thought of being without chocolate, I think, in general, that there are far more creative uses for Lent.

So, here’s my Top Ten Things To Give Up For Lent this year:

1. Complaining. There’s far too much of it around. I know things are bad in many ways, but complaining wont help that one bit. Better to try to change things and take a bit of positive action.

3. Staying inside when it’s sunny out, whenever possible.

4. Worrying about the state of the Irish economy, NAMA, and what the year will bring. In fact, make that worrying in general. Like complaining, worrying doesn’t change anything.

5. Going to Tesco, even when it’s extremely handy. They don’t deserve my hard-earned euros.

6. Arriving home late for dinner with my beautiful little daughter and partner (especially annoying for them since I generally do the cooking).

7. Any restaurant that serves a dish with sweet chili sauce. Time to figure out something a little more interesting!

9. Watching the news. Perhaps these days, ignorance really IS bliss.

10. Anything that gets in the way of friends and family. After all, it’s February, and things will be much busier soon in the world of ice cream!

I’ll let you know how I get on.