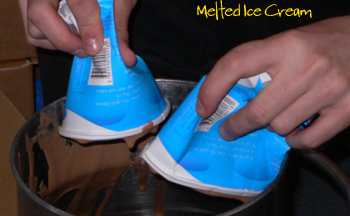 I try to keep politics off this blog, but this story deserves attention:

The Green Party announced today that they are considering bringing a motion to the Dail that would ban freezers in Ireland. The ban is set to reduce carbon emissions, but Irish industry is less than impressed, stressing the likelihood of job losses. According to Green Party spokeswoman Deirdre De Gruen, however, the ban on freezers that could come into effect as early as January 2010 would play a major part in reducing Irish carbon levels to new stringent EU targets.

“We were elected to address climate change and get on with the business of government,” she said. “This bill will have a major impact on the environmental health of Ireland.”

According to activists, eating fresh foods instead of frozen foods would save up to 30 million tons of carbon through savings in electricity and diesel on freezer vans. A total ban on freezers would also result in a significant reduction of waste, as freezers cannot be recycled. In addition, it would have positive health implications, pushing consumers toward fresh produce. Even noted organics champion Prince Charles has weighed in on the issue.

“Food should come fresh from a farmers market or an organic farm,” he told a British broadsheet recently, “not from a little tin or pot. I would love to see Buckingham Palace freezer-free and Camilla agrees.”

So are refrigerators next, and could we survive without our frozen peas and ice cream? According to Government sources there are no moves yet to put a freeze on fridges, and surviving without a freezer might be easier than you think. Almost half of people surveyed by this paper couldn’t identify the contents of their freezers and 32.5% stated their freezers only contained left-overs that would never be consumed.

Not everyone is convinced, however, especially the fishing and ice cream industries. Small business consultant and representative David Montague claims such a bill would jeopardise as many as 1,000 Irish jobs and could have serious consequences for the economy.

“We will be mounting a campaign to stop this mis-guided motion before it ever reaches the floor of Government buildings,” he said.

So will business win out or will frozen fish, peas and ice cream simply melt away? According to the Green Party, there could be special exemptions for food producers and outlets. Chippers might be allowed frozen fish that comes from EU-designated disadvantaged areas, for example, and ice cream makers could still operate if they use alternative power sources.

“Change is not always comfortable, but it is time to do the right thing,” Ms. De Gruen said.

From the Muster Daily Express.

Note: Now that April Fools is past I will add that this was only meant for the day and there is no truth in this whatsoever (as far as I know!)