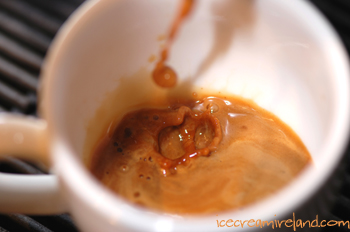 According to the Telegraph, the Italians are so offended by the quality of espressos in European cafes that they are trying to set out a golden standard for their favourite drink. The Telegraph writes:

Marco Lion, the head of Italy’s parliamentary agriculture commission, is worried that the “true identity of Italian coffee” could be lost because, he says, many cafes in Europe do not have the faintest idea how to make a good cup.

Espressos must be “of a hazelnut hue with ornate flourishes of red and a smokiness that creates a uniform tiger-stripe pattern”.

Meanwhile, the “crema”, which sits on top, must be like a “tight sweater, with very fine bubbles, if at all, and of a height of between two and four millimetres”.

…and… “There is only one true and authentic way to make a cappuccino, but for some reason there appear to be myriad types sold in cafes,” he said.

I have to say I agree with his concerns. The purist in me hates the drift to ever bigger drinks, hotter drinks, less care given by baristas under severe time pressure, and style over substance. One would like to think a fight back by the Italians might help solve things, but somehow I doubt it, especially since the cappuccino in the Telegraph’s photo is all about latte art. Poor Signor Lion would have palpitations if he saw it…

3 thoughts on “Can the Italians Standardise Coffee?”