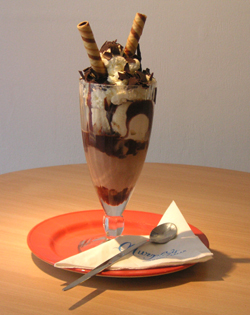 Like the banana split, the ice cream sundae has some controversy about its origin, with many towns from Ithaca NY to Evanstown IL, claiming to be its birthplace.

The story I like best is that during the 1890s, when the rage was consuming ice cream sodas in chemist shops, ice cream sodas were banned on Sundays by the preachers as being too sinful. So someone came up with the sundae as a less sinful alternative.

If that was the height of sinning in the 1890s, one does have to say that those were gentler times!

It’s a bit confusing for me, because I can’t see how a sundae would be any less sinful, but maybe it’s down to the lack of fizzy bubbles. However, it must have been considered a bit naughty all right, for the odd spelling of the name is attributed to avoiding an ice cream dessert named after the Sabbath.

To make a sundae, you will need:

That’s it! Find yourself a long spoon and dig in.

It’s a decadent treat for a lazy summer day!

4 thoughts on “How to Make a Sundae”