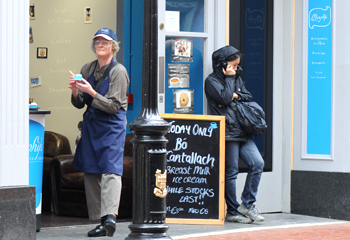 Back in the Autumn, we had a television crew in our Wicklow Street shop for what was to be a new season of the RTE comedy show, Anonymous. The gag was Amanda Brunker dressed as an old biddy, giving out samples of breast milk ice cream (it was actually our Kerry Cream flavour). Fun was had by all.

Now, however, it seems less like a gag, since PR firm Taylor Herring has this post, stating that the icecreamists in Covent Garden are actually serving up the stuff. Certainly that’s bound to get some attention for them, but it wouldn’t really be my thing. However, it’s almost worth a flight over. Simply as a professional. Market research and all.