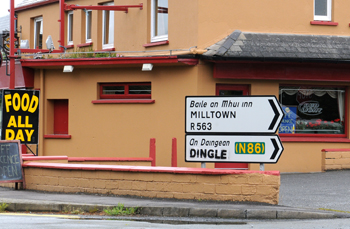 The other day, when driving from Killarney to Dingle, I noticed that the road signs had been spray-painted again. Some helpful graffiti artist had decided once again to try to help tourists find the town without a name. (For anyone who doesn’t know about the controversy, where the Irish government claimed that Dingle no longer existed, there’s a whole archive of news articles here).

It’s been four years now, since the Dingle signs were first taken down, and we still don’t have a resolution. It’s almost been two years since there was a referendum in Dingle (93% voted for naming the town Dingle/Daingean Uí Chúis). Still, nothing. Every few months, the Kerry Country Council tape over the offending name, and every few months, someone puts the name back again.

Politicians from John Gormley to Jackie Healy Rae have promised action. Still, nothing. Thousands of tourists have been lost and frustrated trying to find a town that exists in their guidebook, but not on road signs. It seems the government hopes that in the end the people of Dingle will give up and accept a name (An Daingean) that only 70 out of 1030 voters want. It’s a shameful situation.

(Note: A lot has been said and written about this issue, much of it very heated, because of the Irish language, which is under threat. In my mind, however, the issue is not that complicated. The people of Dingle voted on a name for their town, and their wishes should be respected.)