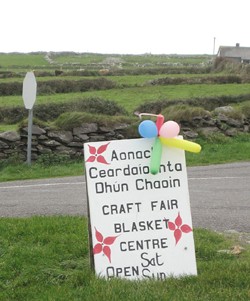 Ok – you might expect Christmas music in New York shops by this time of year. The residents of that fair city have always been unashamed about getting jump on Christmas shopping, which is perhaps one of the reasons for the multitudes of Irish heading over there for their Christmas gifts and goodies. For all I know the music has started up in Dublin and Cork as well. 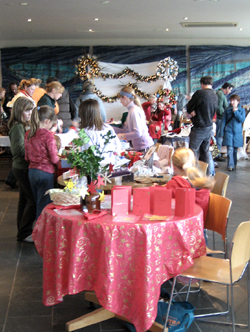 However, in Dingle it’s always been more relaxed – not much bother until a last-minute-panic spree of spending on the 23rd of December (definitely my modus operandi). The early birds around here tend to head to the aforementioned New York, Dublin, or Cork for stocking stuffers, leaving the rest of us in a happy state of denial.

So it was definitely surprising to wander in on a thriving Christmas fair in scenic Dunquin in the hallowed halls of the Ionad an Bhlascaoid Mhoir (the Blasket Centre) before we’ve even reached the middle of November.

Maybe the Christmas fair has always been so early in Dunquin, and I certainly can be absent-minded about such things. But for me it’s far too early to think about Christmas shopping when I’m still munching my way through the leftover Halloween candy!

The music was from Maire Begley’s Chrismas DVD, which is definitely a good gift, and there were lots of cute kids selling baked goods as well as vendors with the usual candles, pottery, and woodwork. But I fled without so much as chewing a mince pie.

For me, it’s just to early! (For everyone else, the fair is also on tomorrow).