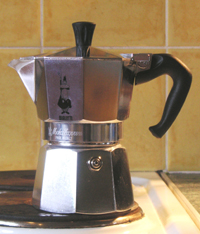 Copernicus over at Midnight Court wrote in a comment here about having trouble getting good crema on his espresso using a little stainless steel espresso pot at home. Given that he said he spent time working in Italy, I assume he means one like that shown above. Practically everyone who has had a meal in someone’s house in Italy would have seen these. My grandmother, who lived on the Lago Maggiore used hers religiously every day.

I can only get very inconsistent crema myself making coffee made by this method. However, I think that the importance of crema is overstated in terms of home use. 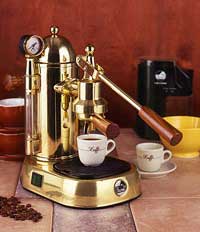 Â In fact, it’s only a guide (though a good one) even in a cafe. There is a excellent article on Virtual Coffee in which the author says that while he believes crema is important, the mere presence of crema does not mean that the espresso is a good one, and that an espresso with great crema can be burnt and bitter. A friend in Dingle is so fixated on crema that he has ordered a La Pavoni pump machine like the one above after I gave him a loan of mine. It’s a beautiful machine, and it’s probably the best possible option for making espressos at home, but frankly it’s a bit fussy for my taste. When I stagger downstairs and into the kitchen in the morning, I want a coffee that tastes good, and I don’t need it to look perfect. In a restaurant or cafe, it’s a different story, and I expect both. That’s the standard for our own shops. But if my morning coffee doesn’t have any crema, I’m not going to worry as long as it tastes as I expect it should. 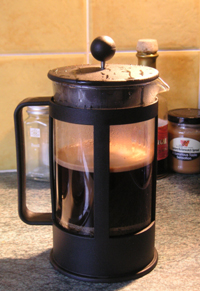 I think my grandmother would have stared blankly at any mention of “crema” regarding her coffee pot, as would probably most Italians making coffee by this method. They would probably say, “If you want crema, go to an espresso bar. If you want a good coffee, stop babbling nonsense, and I will serve it to you.”

So if you’re happy with your coffee, be happy – crema or no crema! If not, switch beans. If you’re still not happy, try making coffee by another method. If you want to try the cafetiere method, it’s cheap and easy, but the coffee will be less like espresso than the above method. I bought the Bodum one on the right in Roches, and I even get a decent crema! Use good, fresh coffee and let the water cool slightly after boiling. If you want a French-style café au lait, use a dark roast ground medium-fine, make the coffee strong, warm the milk (don’t scald it) and combine about half milk and half coffee. Bring on the croissants!

2 thoughts on “Crema and Coffee at Home”