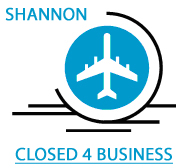 As an ice cream man and not an economist, I’ve been trying to avoid getting angry about how the current economic mess is being handled in this country, but that is becoming increasingly difficult. The government seems to have only two plans of action: 1. Slash as much money as possible from their budget, and 2. Force through NAMA (a done deal, really, since sadly the Greens are supporting it).

What’s troubling to me is that there is very little debate about the economy outside of these two points. Yet fixing the budget is fairly meaningless unless the economic slide stops, since any cuts will be offset by falling revenue, and the economic impact of NAMA is unclear – even if the banks do offer more credit after the bailout, will people and businesses spend?

Meanwhile, there are so many aspects of our economy that need help. In just one example, Ryanair looks like it will pull most of its routes out of Shannon because the airport fees and government taxes are too high, which will mean 1.5 million fewer tourists to the West of Ireland. Airport director Martin Moroney called the pull-out  “regrettable.”

Regrettable? 1.5 million tourists have a heck of a spend. People flying into Shannon wouldn’t tend to be “weekenders.” I would guess their average stay is at least a week, and their average spend is at least €1,000. That would mean €1.5 billion lost to the economy. That’s more than “regrettable.” 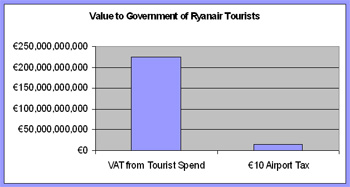 So why wont the government negotiate? Is it because they are offended by Michael O’Leary? Is it stubborn pride? Even if you don’t look at the larger economic impact and just look at government revenue, it should be an easy decision. I made up a chart to show tax revenue  from the airport tax (€15 million) vs. estimated VAT based on 1.5 million tourists with a €1,000 spend (€225 million). Of course, the government would be gaining far more –  the €225 million is only VAT and doesn’t include the payroll taxes of all the people employed to serve the 1.5 million tourists, the avoidance of dole payments, etc.

Whatever one might think about Michael O’Leary, it seems to me that the government should be crawling to him begging him to keep the routes, even if it means rowing back on their precious departure tax. Sadly, there is little sign of such humility and vision from this government…