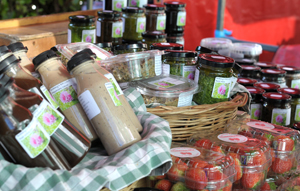 On Saturday, the Irish Times had an article about how Irish brands were going to start disappearing from the shelves of Tesco as the supermarket chain wants to have Irish shops mirror their British shops in terms of offerings. They will start removing Irish products from shops close to the border and in at least one shop in Cork. It is also understood that if successful, Tesco will do the same across all their shops in the Republic.

It’s a story that should have caught the attention of anyone who loves food in Ireland, since the ripples of such a decision would be immense. Tesco own around 23% of the Irish food market, and the impact upon Irish food producers (and Irish employment) in losing such a huge chunk of market share could be catastrophic. According to Bord Bia, the average spend of Irish people on imported foods has risen 50% since 2000. With Tesco dumping Irish brands, that percentage would skyrocket as a large segment of Irish consumers would lose easy access to Irish brands. There could be many Irish food companies that would not survive losing such a large percentage of their sales.

I’ve already written about the web of connectivity here, and I think it’s time to stop pretending that the decisions we make in our spending habits have no effect of the Irish economy and jobs. I also think we need more pride when it comes to Irish foods. I don’t know where the government stands in all of this, but they would be very wise to take action, or they will be complicit in giving us a poorer selection of Irish food items and facing even longer dole queues. Unfortunately, given their track record, I wouldn’t have faith in them doing much of anything.

Perhaps a better plan would be to have a more activist spirit here in Ireland among consumers. Compared to my experience of living in other countries, we tend to meekly accept many things that come at us (with a lot of complaining) instead of fighting back. The power is in our hands. If enough customers vote with their feet or otherwise make their displeasure known, it would put a very quick stop to Tesco’s plans before we lose Irish food companies and the jobs that go with them.

Just a little note: We do not sell into Tesco, so we have no direct stake except possibly losing Irish foods we love.

10 thoughts on “Irish Foods Under Threat”