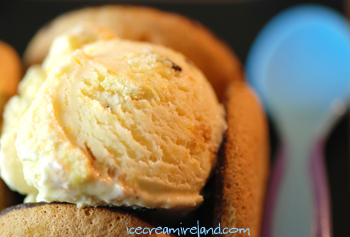 This was one of our very first ice cream formulations and has proven very popular of the the years. In fact, there is a certain little girl whose first word was reportedly “Jaffa” when demanding this flavour from her parents. It’s a crowd-pleaser, with shredded bits of Jaffa cakes as well as another British invention – marmalade.

Marmalade goes way back (the Oxford English Dictionary cites 1480 as the first usage of the word) and is generally made with citrus fruits – orange being the most popular option. As citrus fruits became more available in Britain in the 16th century, marmalade became a choice sweet. In fact, anyone who has travelled in the UK will be hard put upon to remember a traditional breakfast without the option of these preserves and toast.

We like to use the marmalade as a base flavour and freshen it with orange zest. The great thing about orange zest (besides its magnificent taste) is that it uses a part of the fruit one would normally just throw away or compost, and that always is a pleasure.

Note: To pasteurise the eggs, heat the custard to 73C and maintain that temperature for at least 5 minutes. Use a cooking thermometer, though! If the custard goes any higher than 76C, the eggs will scramble. Immediately cover and place in the freezer until cool.