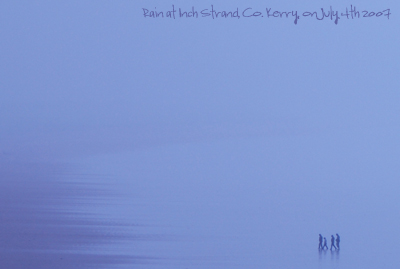 Driving home from our Killarney shop, I heard on the radio that Cork had 10 times the amount of rainfall in June this year compared to last year. Ireland as a whole has had double the average rainfall. I’m not surprised. It’s getting pretty soggy here in the world of Irish ice cream.

It’s July 4th, and one might think of barbeques in the sun, but instead, the rain has been incessant, and it’s been cold and windy as well. I saw a single family walking on the beach at Inch and took the photo above. Normally at this time of year, the beach would be chock full of sun-worshipers and surfers, but it was deserted. I took the shot at mid-afternoon, so you can see how murky things have been!

In Killarney, it was judging day for the Entente Florale, with street entertainment and a parade planned to impress the judges. Instead, there was a lot of rain. The town did make a huge effort, though. There are beautiful flower arrangements everywhere, and I do hope the judges look past the weather! 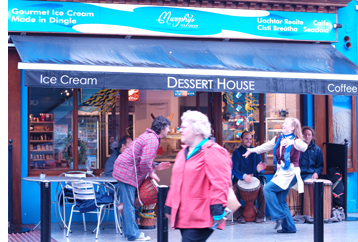 My sister, Deirdre, is over from Germany, and she did her bit to cheer up our customers by painting a huge sun on the shop window and then going even further by dancing with the drummers who took refuge under our awning during the worst downpours (and then were reluctant to move on from their safe haven).

I think my sister has the right idea. We’ll put up lots of painted suns in both shops. Maybe there will be dancing. We will have a summer one way or the other!

3 thoughts on “Summer, what summer?”